I know a few of you have read the Jane Harper books. Those are the books I keep meaning to read but haven’t got around to.  On Friday night a friend and I went along to the Fuller’s Book Shop launch of her most recent book, The Lost Man. 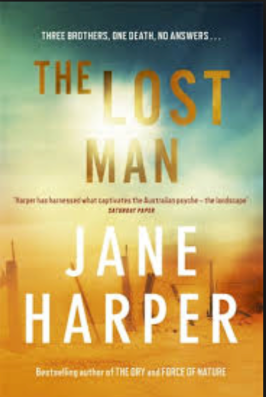 As there were quite a few people expected to come it was held in a conference room at the RACV Hotel across the street from Fuller’s. It was very flash sitting in reception with our drinks waiting to enter the room. The event had a good turnout but wasn’t mobbed.

I really enjoyed hearing her talk about how she writes and the research she conducts for her books. I love research and this sounded like so much fun.

Jane is a journalist who lives in the city of Melbourne. Very urban. However her books, of which there are three, all take place in the outback.  She talked for quite awhile about her experiences researching the isolation of the outback, the people she met, the pubs she visited. She also spent time with organisations such as the Royal Flying Doctors. She said she enjoyed it so much she didn’t want to leave. She spent most of her time in western Queensland.  Australia’s drought ridden country plays a role in all of her books so far. She stated her journalistic background was instrumental in succeeding in the research she did for these books.  She talked quite a bit about how she had to get the dialogue right as the country folk of rural Queensland speak differently than those urban dwellers of Melbourne.

She also mentioned The Dry has been optioned for a film by Reece Witherspoon’s outfit so look out for it in the future.  One audience member asked her about who would be cast as Aaron. She couldn’t tell us due to confidentiality clauses but stated she was happy with the person chosen if it goes ahead.  It will also be filmed in Australia and not America.

She presents as a really down to earth author and everyone in the audience seemed to enjoy her.  I came home and began to read the copy of her first book I have, The Dry. It features a federal policeman, named Aaron Falk. He returns to his hometown for the funeral of his childhood friend, Luke Hadler. Luke and he had hung out as part of a group of four, including their girl friends when they were young.

Luke Hadler killed his wife and son, then shot himself. The younger daughter was spared.  There was a history that involved a death of one of the girls. The classmate from years gone by and the town people still think he killed her. His reception in his home town after 20 years doesn’t go that well.

I am enjoying this book and now Aaron and the local town cop are beginning to think things just don’t add up around Luke’s family’s death when they visit the scene of the crime…well… let’s say, the plot thickens.  The Dry is Jane’s first book and I am right into it. I think I am not alone in thinking this is a very good book.

Since then she wrote a second book with the same protagonist called Force Of Nature.

The launch I attended was about her third and latest book that is a stand alone novel that doesn’t include Aaron Falk.   It is titled The Lost Man.

During question time one of the audience members asked if Aaron would come back in the future.  She stated she didn’t see a long term series as she didn’t want to do that, but she felt she owed him quite a bit, so don’t be surprised if he reappears in future. That got a laugh from the audience.

It was a lovely, fun way to spend an evening with a friend and I plan on reading her other novels once finished with The Dry.

If you’ve read any of her books what did you think?

6 thoughts on “The Weekend Wander – Jane Harper in Hobart”

Good News in Books and Music

Two books and a puppy!