This past couple of weeks I’ve been reading a fair bit but the books I want to share with you today are in the subject of photography. 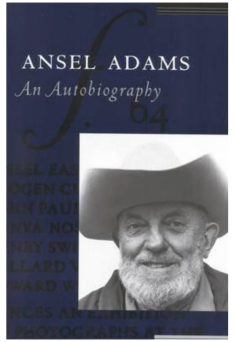 The first one is the Autobiography of Ansel Adams. This book presents the life story of one of America’s best known and most popular photographers and environmentalists of the 20th century. Adams was also a teacher, musician and crusader over the last six decades. He was born in 1902 and lived until 1984. This autobiography came out the year following his death in 1985.

I am in the middle of this book now and am loving it. He was an excellent writer and there doesn’t seem to be a lot he leaves out.  I am also finding the history of California (he grew up in the San Francisco area) fascinating. He talked about the big earthquake and fire of 1905. There is so much that happened during the first 2/3 of the 20th century and he describes it through his eyes.

That alone is interesting enough but then he goes on to describe his love of music and studying to be a concert pianist.  The art scene in San Francisco in early 1900s was just brilliant and very energetic.  He hung out with artists, poets and the people who started the Sierra Club. He got to know Yosemite National Park like the back of his hand, long before it was recognised as a national park. He had strong ties to the southwest of the United States.

Some of his descriptions of climbing the rockiest areas in Yosemite carrying his camera and all the gear back in the 1920’s is exhausting. Photography back then was very different than it is now. He studied shapes and lighting more than colour as colour wasn’t possible back then.  The work that was completed in the dark rooms was interesting and difficult.

The reader learns of his wife, friends and parents as the years go by.  It is a well written biography and I would recommend it for anyone who loves photography, music, the arts or American history of the western states.

The second book I’d like to share is one by (still living) Joel Myerowitz. The book is called Aftermath.  It is a compilation of photographs from the terrorist attack of the World Trade Towers of New York City of 9/11. The book is a huge, coffee table sized tome that takes two hands to carry it. You need to set it on a table to read it. I don’t usually read anything about that day but this book is important for one reason.  After the attacks happened, New York City officials completely surrounded the site in high fences and secrecy. No photos were allowed.  This day was going to go completely unrecorded photographically.  Mr. Myerowitz spent days making friends with some of the officials

onsite, especially a group of police officers.  Many of those working the site thought the pictures should be shared. It was almost as if it was being covered up. Eventually as he stalked the area daily, making himself known he began getting into the site and taking the photos of the cleanup that continued for a long time. He donned a hard hat he found, dressed the part, found various pieces of things he could wear from the workers and started photographing various angles of this disaster. He was thrown off the site several times but he kept going back. The photos are amazing and one feels as though they are penetrating all angles of the destruction of so many buildings. There are also quite a few photos of the surrounding buildings with all their windows blown out and missing walls. One can see into all the offices with the missing walls.  The portrait photography of the workers is also very interesting to look at. He captures so much emotion in his photography. Many stories are being told within the site. 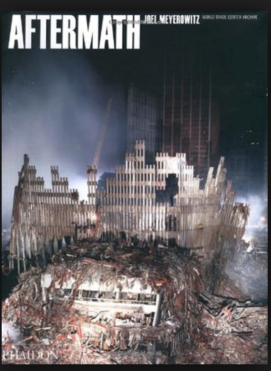 This book has made me think quite a bit. Had this single photographer not persevered to such an extent the whole incident would have been visually lost. The bureaucracy around the cleanup was quite interesting and I paused many times not believing what I was reading.

Mr. Myerowitz was born in 1938 in the Bronx, New York and there is a wonderful short biography of his achievements here.  He continues to teach photography. He is well known for his street photography especially and he is on Instagram (here)  if anyone is interested in seeing what he is doing currently.  There is a vast store of knowledge and photographs that can also be searched on google under his name.

I always think I enjoy reading fiction the most but it seems the older I get the more I enjoy reading non-fiction, especially in learning what so many amazing people, both alive and now gone have given to the world. It is probably a way of distracting myself from the horrible world leaders we seem to have now in so many countries. I wish the good people of the earth got as much media coverage as the awful ones. The world would be a more inspiring place.

My first book finished this year.